Cranes, today, are an important part of industry and can be applied in many different areas, e.g. Fig. 1. In addition to the structural dimensioning, a design of the crane structures that is resistant to tampering is particularly of great importance. 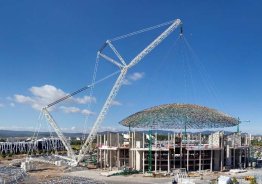 In 1992, on the initiative of the University of Karlsruhe (today the Karlsruhe Institute of Technology KIT) and the RWTH Aachen, a crane construction working group was set up, in which research projects in the field of fatigue resistance of crane structures were applied for and accompanied by experts from the crane industry. This enabled prob- lems from the calculation, detailed training and production in the research projects to be implemented directly. In 1995, the University of Applied Sciences Munich was included in the working group, later also other research institutions. The aim of the investigations in the research projects was to extend the notch case tables available in the standards by crane-specific notch case details and to correct some of the notching cases to the ranking at that time, thereby enabling lighter and more economical manufacturing in crane construction. As part of the first initiated FOSTA research project P 293, six detail points were put into practice, e.g. frame work connections from angle profiles, various designs of longitudinal stiffeners and eye bar connections were examined. After the successful completion of the first project, the 3 research projects P512, P778 and P900 were performed in which pilot studies were carried out on special notch cases e.g. stud welding, removed tack welds and butt joints on high- and ultra-high strength steels. On top of this, investigations were carried out to determine the load spectrum on tower cranes in different areas of application.

Within the framework of two further research projects (FOSTA P 801 and P 915 / AiF-profUnt KRASP), details of hollow-section constructions were examined at the University of Munich.

The current FOSTA research projects on the fatigue strength of crane structures at the Uni- versity of Applied Sciences Munich, KIT and KoRoH, Karlsruhe are summarised below:

In the future, further research projects in the field of fatigue strength of crane structures are planned, especially with regard to durability, lifetime extension of existing crane structures and the influence of internal weld defects on its life expectancy.

The authors thank FOSTA e. V. and the other research funding agencies for their previous support and wish for continued research into the fatigue strength of crane structures.